The energy secretary has confirmed a development consent order (DCO) for the world’s first Tidal Lagoon Power Plant off the Welsh coast.

The Severn Estuary has the second largest tidal range in the world. With Swansea Bay benefiting from an average tidal range of 8.5 m during spring tides.  A 9.5 km long seawall will house up to 16 turbines. Which will generate electricity on both the rising and the falling of the tide. The scheme will have a normal capacity of 240 megawatts and provide enough renewable energy to supply 155,000 homes for 120 years.  The tidal lagoon will provide an important contribution towards the national carbon emissions reduction targets. That will save over 236,000 tonnes of CO2 annually.

Although the DCO took over 16 months to decide. The project has not yet received permission for all aspects of the scheme. Due to the powers devolved to the Welsh Assembly prevent the broad consents possible in England.  Those matters still undecided include the associated leisure facilities and the 275 kilowatt electricity connection.  While the Swansea Bay Tidal Lagoon will have to seek approval for the elements of the scheme exempt from the DCO. The next hurdle will be securing a guaranteed price for the subsidies paid on the energy.  That has been produced with the Department for Energy and Climate Change (DECC). 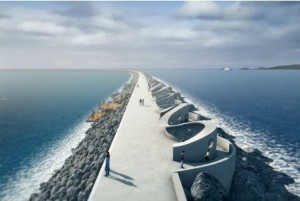